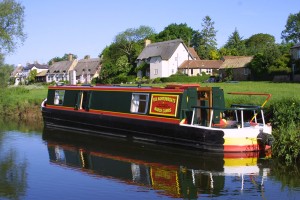 The waterways that make up the Middle Level system are a mixture of natural rivers and man made canals / channels that were started early in the 17th century. The Dutch engineer Cornelius Vermuyden was employed by a company lead by Francis, Earl of Bedford to drain a large area of land now known as the Bedford Level. The work included the Bedford River and nine other major drains. The draining of the Fens was a cause of great dispute between the Fen men, who lived in the marshes by fishing and catching wildfowl, and the landowners who were keen to use the land for agriculture.

The legacy of the draining of the land can still be seen in the naming of the artificial channels such as the Old Bedford River (completed in 1637), the New Bedford River (completed in 1652) and the Forty Foot River (1649). One unexpected consequence of the draining of the Fens was the shrinking of the dried out land. Over the years the land has sunk and most of the area is now below sea-level, meaning that Middle Level rivers now have to be pumped up to sea-level to drain the land.

We collect some of your data automatically and use cookies. We will never share your data with another company for marketing purposesOkRead more