↓ Skip to Main Content
Home › Canal Blog › Have you met Abby yet?

Have you met Abby yet? 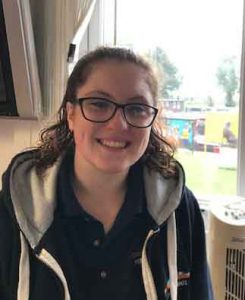 Abby is our new marina assistant.  Abby joined the company earlier this summer, however she went on leave soon after joining us to take on a volunteer roll as a staff member at the 24th World Scout Jamboree. Back at work now Abby is assisting with the hire fleet customers and working in reception.  We are sure that her experiences at the Jamboree will help her in her role with the company. Say hi to her when you next see her.

Abby will tell you about her adventurers which we think look amazing.

‘ I am a regular volunteer leader with a local Scout Group. Every four years the Scout Movement hold an event called The World Scout Jamboree, this year I was lucky enough to have been selected onto the 24th World Scout Jamboree held in West Virginia. I underwent several stages of selection including written applications and selection days before being offered a roll as part of the International Service Team for the UK Contingent. This meant that I would be travelling to West Virginia for two weeks to be a leader for the young people from Scouting and Guiding around the world. Different members of the International Service Team had different job roles for their time at the Jamboree. For example, I was part of the Zip Lining Support team. The World Scout Jamboree is a large event and this year 40,000 people attended from 152 countries.

After volunteering at the Jamboree, the UK Contingent organised a trip for the leaders to travel to Washington DC for two days. Some of us went on a sightseeing tour around DC. However, I went on foot with a few of my friends enjoying and exploring what DC had on offer. On my second day, I got to watch a Baseball game. It was amazing it was everything I expect it to be and more, just the atmosphere was incredible. To end that day, the UK contingent hosted a party to celebrate what we achieved through the last two and a half weeks. Some of the International support team were flying back to the UK the following day, however some of us were travelling to other parts of American.

For me, I was travelling to Boston then to New York. I’ve always wanted to go to New York so I jumped at the chance to go! In Boston we visited Harvard University, The Tea Party Ship Museum and did the Freedom Trail. I really enjoyed Boston but was very excited to go on to my next adventure in New York. When we went to New York we went to the Statue of Liberty, Ellis Island, the 9/11 memorial and museum, Times Square, Central Park and the Top of the Rock! It was great, I loved everything I did. On the last night me and my friends went and watched a Broadway show it, it was called ‘Puffs’ it was a lovely way to spend my last night in New York.

Though the thought of being away from home for just over three weeks was a bit terrifying I loved it and would do again tomorrow if I could! The best experience I could ever had done! Got to meet new people and make friends and hopefully I am going to have a chance of seeing them again soon.’

Share
Related posts: Travel the Waterways like a Fictional Gypsy Are Museums Ever Fun? The Answer Might Surprise You Charity of the Year
Tags: 24th World Scout Jamboree, marina assistant, Scouting