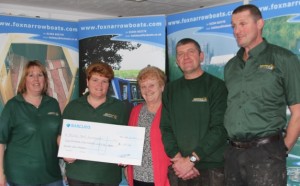 Fox Narrowboats staff raised the money from a variety of events including narrowboat trips at the St Georges Fayre in March, a tool sale, book stall, and a sponsored cycle ride around Rutland Water. They finished the year with Christmas tombola.

Tracey Baxter Finance Director at Fox Narrowboats said “We are delighted with the amount raised for British Heart Foundation this year and would like to thank our customers and staff for their support. Next year we will be supporting the East Anglian Children’s Hospice and our first event of the year will again be Boat Trips at the March St Georges Fayre on 26th April”

East Anglian Children’s Hospice support families and care for children and young people with life-threatening conditions across Cambridgeshire, Essex, Norfolk and Suffolk. There care and support is tailored for the needs of all family members and delivered where the families wish – in their own home, at hospital, in the community or at one of three hospices in Ipswich, Milton and Quidenham.