MAGPAS presented with a cheque following a sucessful fundraising year!

Fox Narrowboats staff visited the MAGPAS air ambulance base at Wyton last week to present them with a cheque for £2,394.59. The money had been raised by staff at the company during 2016. On arrival, they were greeted by Steve Holt, Director of Fundraising and given a tour of the base. Steve spoke to Marina Manager Emily and Marina Assistant Pam about how the funds raised would be spent, the equipment they currently have, their plans for the future and how without the generosity of the public the charity would not exist as it solely relies on donations to provide 24/7 care to Cambridgeshire and the surrounding area.
After Speaking to Steve, Emily and Pam were taken outside to view the helicopter and formally present the cheque. They got the chance to speak to paramedic Chris Hawkins, Doctor Steve Corry-Bass and Pilot Andy Figg. Emily said ‘ I was very humbled by the job MAGPAS does on a daily basis, I hope people carry on supporting them as they hope to achieve enough funds to expand the helicopter operating hours providing lifesaving care for our region’.
Over the course of 2016 Staff & patrons raised funds for MAGPAS partaking in various activities, from Tombola’s, Boat trips at March town St Georges Fayre, evening 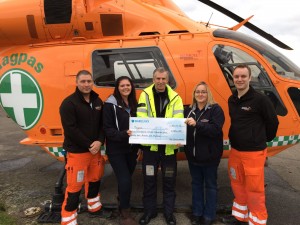 skippered boat trips through March and sponsored Walks. Pam, took on the almighty challenge of walking 50km from Runnymede to Henley in Oxfordshire. The walk took her 12 hours to complete, the terrain varied from muddy fields, footpaths, towpaths and villages. unfortunately, it rained most of the day, however Pam persevered and completed the walk. Although exhausted Pam said ‘It was a challenging day but I was determined to complete it for such a good cause as you never know when you might need the services MAGPAS provide.’
Fox Narrowboats charity for 2017 is Kings Lynn based Scotty’s Little Soldiers a military charity to help bereaved British Forces children. Work is already in hand preparing for the first event of the year at the March town St Georges Fayre. Since 2013 Fox Narrowboats have raised over £9,000 for good causes from their Charity of the year events.