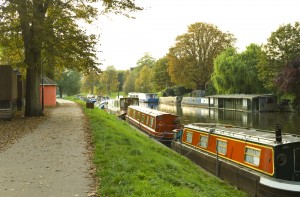 An advantage of taking a British summer holiday is that there’s nothing quite like visiting a succession of traditional English pubs to enjoy a cosy, nostalgic feeling of times gone by. For those that enjoy a leisurely pub stroll, a canal boat holiday is possibly even better: Enjoy beautiful scenery and pretty villages, with the convenience of taking your holiday accommodation with you on your journey!

Here are five places to moor and seek out refreshments, as you lose yourself exploring by boat on the River Cam.

Next to Upware marina there are plenty of moorings along the frontage of the Five Miles From Anywhere, No Hurry Inn (formerly named the Lord Nelson). It was rebuilt in 1980, some time after the previous building was destroyed by fire in 1957.

In the 1850s a university club founded the Upware Republic at the Five Miles from Anywhere with a president, a consul, a treasurer, a justice, its own laws, and its own money. Then, in the 1870s, Richard Fielder MA, Member of Lincolns Inn, declared himself King of Upware. Wearing a red waistcoat and corduroy trousers, he would drink from a six-gallon jug of punch known as His Majesty’s Pint, and argue with passing bargees.

The Bridge Hotel is opposite the large 19th century yellow brick Conservators House at Clayhithe and has moorings for customers. There is also a, the plough 100 metre stretch of 48 hour mooring available just upstream of Clayhithe Bridge. (Mooring elsewhere, beside the towpath is forbidden by the Cam Conservancy.) Nearby in the village of Horningsea are the Plough and Fleece, and Crown and Punch Bowl public houses where food is available.

Stop in Fen Ditton to see thatched cottages and 16th and 17th century houses with graceful terraced lawns sweeping down to the river. You will find refreshments at The Plough Inn, the Kings Head, the Blue Lion or the Ancient Shepherds. This listed building was originally built as three cottages in 1540, and so it has plenty of traditional charm and character. It offers guest and house ales and a varied menu.

Chesterton is now a suburb of Cambridge and offers the travelling boater a popular riverside pub; The Tudor Green Dragon.

Passing through Midsummer Common and Jesus Green you will have your choice of The Fort St George, a popular riverside pub, The Boathouse, The Rat and Parrot, The Graduate, Midsummer House Restaurant and Restaurant Twenty-two.

So, get yourself moored up near Jesus Lock, and go forth and explore the pubs of Cambridge!

Ref. The information featured in this article can be found in The River Great Ouse and Tributaries, an Imray guide, by Andrew Hunter Blair.

Update: Since the Imray guide was published there have been a few changes. Fen Ditton and Chesterton no longer have visitor moorings, and there have been some notable changes to the pubs: The Tudor Green Dragon is now just the Green Dragon, The Graduate became the The Tivoli in 2011 and then burnt down earlier this year, and the Rat and Parrot is now closed. Also, please be advised that Midsummer House and Twenty Two are not places to just stop for a drink, but are lavish “fine dining” restaurants.

Tweets by @FoxNarrowBoats
Our 2022 narrowboat holiday prices include 12.5% VAT which is set to increase on 1st April 2022 so you could pay more than the advertised hire price.
Learn about the discount
close
Toogle Down
We collect some of your data automatically and use cookies. We will never share your data with another company for marketing purposesOkRead more