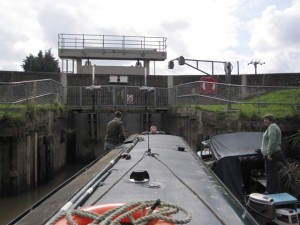 Lois and Roy Parker in their cruiser and Alastair and Jonathan Chambers and myself in my Fox narrowboat attempted to enter the Old Bedford river at Salters Lode on Saturday 5th September 2015.

The Parkers were successful and locked through the Old Bedford sluice into the Old Bedford river. They then proceeded along the Old Bedford for about a mile, negotiating their way through dense clumps of floating reeds before being stopped by an impassable mass of cott weed. 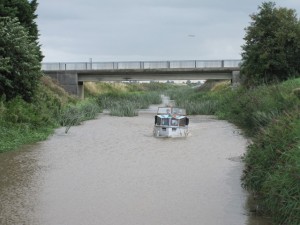 The Parkers on the fresh water side of the tidal doors

They then turned round and made their way back through the sluice and returned to the Middle Level via the main lock at Salters Lode. Both tidal doors and guillotine gate at the Old Bedford sluice worked well and the Middle Level Commissioners’ relief lock keeper was very helpful.

I had no problems reaching the tidal doors in my narrowboat but was unable to enter the Old Bedford “on the level” on this occasion.

While we were there a canoe was launched and set off for Manea and I was watched by a common seal as I reversed into the main tidal river. 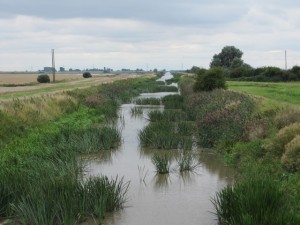 Navigating the Old Bedford remains problematical and efforts are being made to restore it as part of the East Anglian Waterways Association (EAWA) “Project Hereward” scheme. It is worth remembering that until the derelict Well Creek was restored to navigation there were only 2 ways to get from the Nene to the Great Ouse; either a sea crossing of the Wash or the route via the Old Bedford, Welches Dam lock, Horseways Channel and Horseways lock. It is not surprising that most boats, including Fox’s Hire Fleet, chose this latter route rather than the Wash.

Thanks to John Revell mooring customer, for this guest article with photos.