Mooring customer John Revell sends us a further progress report on attempts to enter the Old Bedford river.  If you haven’t read John’s earlier report you will find it here. 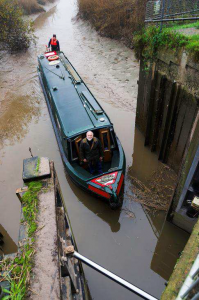 John Revell steers his boat Olive Emily through the lock
into the Old Bedford River at the latest attempt made in
November.

In September 2015 Lois and Roy Parker entered the Old Bedford River in their cruiser Marie II via the tidal doors at Salters Lode. They cruised for about a mile before being stopped by a combination of floating reeds and impenetrable cott weed. On that occasion I was unable to get my narrowboat into the Old Bedford “on the level” so another attempt was made in November with David Venn as the “volunteer” crew. We made good progress from the normal lock at Salters Lode into the narrow, shallow and muddy tidal stretch which leads to the tidal doors of the Old Bedford sluice. The Middle Level lock keeper (who operates the sluice on the Environment Agency’s behalf) was there to open the tidal doors which worked well so that once the guillotine gate was open I could enter the Old Bedford “on the level” quite easily. This was apparently the first narrowboat to get into the Old Bedford in 2015. There was enough depth to collect more crew (Jeff Walters and Mike Daines) and we set off hoping to reach the Lamb and Flag at Welney. The next part of the trip was relatively straightforward with about 4 feet depth in the centre of the river. However, after about a mile the river became shallower, the propeller began to collect cott weed and the boat came to a complete standstill. We were able to move forwards a short way clearing the propeller as best we could but it was obvious we would not get much further. We turned round using poles and slowly made our way back to the Old Bedford sluice. By then the tidal river was too high to leave “on the level” so the crew left by car to look at Welches Dam lock (or more likely the Lamb and Flag) while I removed the cott weed from the prop. This short trip showed that it was still possible to get into the Old Bedford in a narrowboat but that it will remain difficult to reach Welney or Welches Dam lock until the Environment Agency takes action to make this river fully navigable again. It is not rocket science. They could increase the depth of water in the river and they could dredge the river and they could remove the cott weed. The Environment Agency may plead poverty but how is it that the Middle Level Commissioners manage their waterways without any income whatsoever from boat licences and boaters?