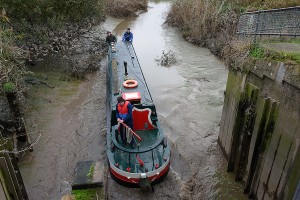 John Revell reverses Olive Emily into and through the Salters Lode sluice gate to join the Old Bedford river.

Following on from John Revell’s previous blog about the efforts to restore the Old Bedford river to navigation.  John follows up with his latest thoughts.  Photography by Mike Daines.

In November 2016 I took my narrowboat Olive Emily, based at Fox’s Marina in March, into the Old Bedford River via the tidal river Great Ouse at Salter’s Lode. This is not as simple as it sounds. It has to be done “on the level” and the Old Bedford and the narrow tidal channel which leads to it are in poor condition. As a result few boats have been willing or able to do this in recent years.
I attempted the same journey in November 2015 and managed about a mile before being forced to turn round through lack of water and a massive amount of cott weed which completely clogged up the propeller.
This year I emailed the Environment Agency (EA) well in advance on the 7th October advising them that I proposed to navigate the Old Bedford during the period 3 November to 5 November. I further explained that I would aim to cruise all the way to Welches Dam lock and I asked for confirmation that the Welney Guillotine Gate, through which we would have to pass, would be left in the raised (navigable) position. I never received a reply from EA.
I successfully entered the Old Bedford at 7.45 am on Saturday November 5. This was not straightforward (see photos) but the Middle Level Lock keeper and an EA staff member were very helpful and together with a volunteer crew of David Venn, Chairman of IWA Peterborough branch, Chris Howes, Ivan Cane and Mike Daines, I headed off towards Welches Dam. 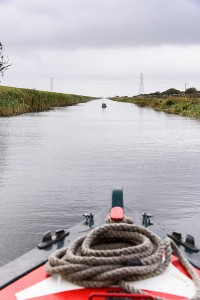 A view rarely seen over the last ten year!. Looking over the prow of a narrowboat navigating the Old Bedford river towards Welney and Welches Dam lock.

We made quite good progress at first and soon we managed to pass our one mile progress marker from the previous year. After another mile or so there was evidence of dredging on the west bank with the spoil piled up along the bank and the digger visible in the far distance. It was this dredging that had quite obviously enabled our progress up to and beyond our one mile limit of the previous year.
Further ahead were the overhead electrical power lines that cross the river around three miles in from Salters Lode. A previous attempt in July 2008 to reach Welches Dam in my narrowboat, accompanied by Lois and Roy Parker in their cruiser Marie 2, had failed because this section hadn’t been dredged for years.
As we approached the power lines the river took on a glazed and milky look and we became engulfed in a mass of cott weed with the water level dropping to a silted muddy depth of just one foot. 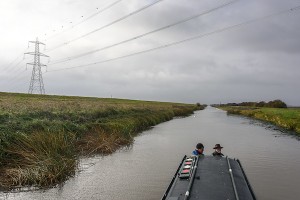 Heading towards Welney on the Old Bedford river in November 2016. NB Olive Emily is about to run into a mass of cott weed and an undredged length of the river that runs beneath the power cables three miles from Salters Lode. This is evident from the uncovered section of bank underneath the pylons and the continuation of dredging further along towards Welney and Welched Dam lock.

It immediately became obvious that we couldn’t proceed any further and once again we would reluctantly have to abandon our goal and turn around. With much prodigious poling by the crew Olive Emily was slowly extracted from the glue and turned back into deeper water to make her return to Salters Lode.
We had again been defeated by the same problems as last year, insufficient depth of water, lack of dredging and masses of cott weed.
We had failed in our objective to reach Welches Dam lock which was stanked off by the EA in 2006. This lock has remained closed and impassable for 10 years despite the efforts of the IWA locally and nationally, the East Anglian Waterways Association, Fox Boats and the Project Hereward team. The “temporary” piling which was installed by the EA in 2006 covers most of the entrance to the lock so it is very effective at stopping boats but rather less effective at stopping leaks which was claimed to be the reason for the piling in the first place.
Two developments occurred between my email to the EA on 7 October and my passage on 5 November. Firstly, I found out late on 3 November that the Welney guillotine gate was in the down (unnavigable) position. This came as a surprise as I had been assured that it would remain up (navigable) position unless there was a change in river conditions.
I live in East Anglia and I knew that the weather in East Anglia had been dry for some time so the closure of the Welney gate was puzzling.

Olive Emily’s volunteer crew man the poles to extract her from the silt.

More importantly, the water level in the Old Bedford had been dropped by a foot in the week after I had notified EA of the dates of my proposed passage. This is even more puzzling and I have been unable to find out why this was done and by whom.
EA is a multi-functional organisation so any part of it might have authorised this action. It might have been done by flood control, it might have been fishing, it might have been engineering, it might have been navigation, it might have been environment. Who knows?”
Whatever the reason, this had made the tidal passage into the Old Bedford at Salters Lode unnecessarily difficult and muddy. It meant that that the depth of water in the Old Bedford was shallow throughout. It also meant that an attempt to enter the Old Bedford the previous day (November 4) had been unsuccessful and had had to be abandoned.
The general lack of depth became an insuperable problem when I had reached the stretch of very shallow un-dredged water, deep mud and glutinous cott weed close to the overhead electrical lines. Everyone knows that special precautions must be taken when working near them but this situation arises routinely on other rivers and canals and is easily overcome. Indeed the same overhead lines cross the nearby navigable New Bedford river, Well Creek at Nordelph and the Great Ouse at Littleport. 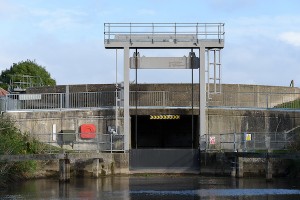 The Salters Lode sluice pictured from the Old Bedford. The water mark on the guillotine door is clearly marked and was a good two feet lower.

The Old Bedford is not a dead end waterway leading nowhere but is part of a long established route that needs to be restored to full navigation. It would make an interesting cruising ring. It has been navigable since 1637, well before the main canal era started. It is a statutory navigation and it needs to be maintained.
Although the Old Bedford remains officially open it will remain off limits for all but the most determined boater until it is deep enough, and dredged properly.
The Canal and River Trust (CRT) has built on the long experience of British Waterways in managing rivers so that they remain navigable most of the time but are closed when flood conditions require. Just think of the Rivers Soar, Trent, Severn, Avon, Weaver or the river sections of the Trent and Mersey or the Caldon or the Calder and Hebble to name just a few.
Would the current lamentable state of affairs in this part of the Fens be tolerated elsewhere on the system? Would this have been allowed to go on for so long if CRT managed it? Would it not be better if responsibility for navigation matters on waterways that are currently managed by EA be transferred to CRT?