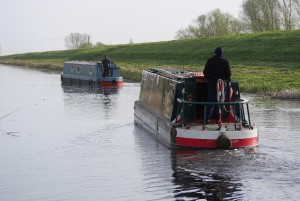 Progress on the Old Bedford river

Non tidal access to the historic Old Bedford River was lost in 2006 when the E.A. closed Welches Dam Lock, thus stopping access to a waterway that had been navigated for over 350 years. Since the closure various attempts have been made to access the Old Bedford from its outfall into the tidal Great Ouse. In 2009 an enterprising couple, Lois and Roy Parker, succeeded in getting onto the river and through to Welches Dam in their shallow drafted cruiser, but no narrowboat is known to have managed it.

On 4th April 2017 veteran of several previous tries, John Revell, lead another attempt in his 41ft narrowboat ‘Olive Emily’. He was joined by Chris Howes in his 45ft narrowboat ‘Lily May’ and Jeff Walters in his 50ft narrowboat ‘ever after’. The boats marshaled at Salter’s Lode lock on the Well Creek.

Currently access to the Old Bedford river can only be gained at low water on a ‘neap tide’ (which is the highest low tide, occurring only fortnightly). However because of silt build up at the mouth of the river to the Great Ouse, there is only a few inches of water and the passage can be described as between ‘very difficult’ and ‘damn near impossible’ ! However after much writhing about in the mud, and over an hour of trying, all three boats scraped through.

The E.A. had kindly raised the water level in the river sufficient for comfortable passage to be made, and previous problems of cot weed and ‘bottoming out’ were avoided, The E.A. had also lifted the guillotine gate at Welney, which is generally an obstacle to navigation. 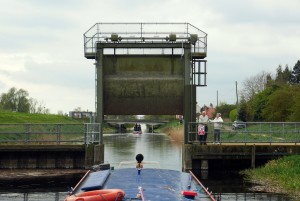 In the morning the three returned to Salter’s Lode for low tide. Again it was very difficult to get through the sluice gates onto the Great Ouse, but after two hours of trying the happy trio and their mud splattered boats finally made it !

An emotional John Revell observed “I was one of the last boaters to use Welches Dam lock from Horseway Channel before EA suddenly piled across the lock entrance in 2006. I never thought it would take another 11 years to reach it from Salters Lode. I’d like to give a big ‘thank you’ to the E.A. for their support this time, without which the trip would have failed. I’d also like to pay tribute to the late, great, inspirational Charlie Fox, it can be no coincidence that 2 out of 3 of the boats that made the difficult passage were Fox boats !” 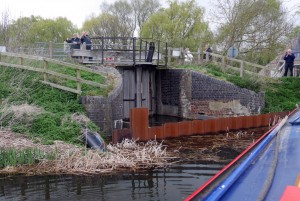 Chris Howes added “after the great difficulties getting onto the Old Bedford through the silted up estuary entrance, the journey itself was lovely. The huge frustration was that when we eventually made it to Welches Dam Lock we were only one closed lock and approximately 2 miles of de-watered channel away from the navigable network.”

Jeff Walters also added “I’d like to join in the thanks to the E.A. for their fantastic co-operation. As a member of the Project Hereward restoration team, can I make a heartfelt plea that the E.A. continue this invigorating, fresh spirit of working together by now facilitating the entry of the IWA’S highly qualified engineers into Welches Dam Lock to assess the true extent of necessary restoration?”