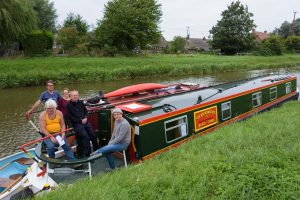 gathering at Salter’s Lode prior to the cruise. Photo Mike Daines

Following on from the IWA Campaign cruise on the Old Bedford river on 19th and 20th August 2018 prior to the IWA Festival at water at St Neots we can update you on the progress.

Only one narrow boat made it through the Old Bedford Sluice at Salter’s Lode, which demonstrates the difficulties in accessing the Old Bedford River from the tidal Ouse.  Two other narrow boats and a 22ft sailing yacht, which had crossed The Wash to take part, also attempted to get through the sluice gate, but failed despite valiant efforts by all concerned.  These attempts took place over three different tidal windows when a level was reached, to allow passage through the single guillotine gate, but the tidal entrance was too shallow and silted to allow any but the shallowest boat through.

Three portable craft were put directly into the Old Bedford River by the sluice gate at Salter’s Lode, and so a flotilla of 4 boats set off and reached Welney, about half way along the waterway, by the Sunday evening.

On the Monday morning the four boats continued their journey along the river, encountering much more weed along this section which made the passage slower, and 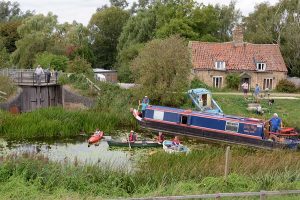 arrived at the closed lock at Welches Dam soon after midday.  Those supporters viewing the flotilla from the bank included some of the boaters who had been unsuccessful in getting through the sluice, the crew of a boat who had arrived at the other end of the Horseway Channel (who had walked the short distance to Welches Dam lock along the towpath of the derelict Horseway channel), and a TV news reporter with camera and drone.  After photos and interviews had taken place, the flotilla set off to return to Salter’s Lode, and the narrow boat successfully passed back through the Old Bedford Sluice on the ebbing tide on the Monday evening.

Chris Howes, IWA Eastern Region Chairman and skipper of Lily May, the one narrow boat that managed to get on to the river, said “On behalf of IWA and the other boaters taking  part in this event I would like to thank EA and MLC staff for their support in enabling the campaign cruise to take place.  We look forward to working further with EA to come to a resolution regarding the continued closure of Welches Dam and the difficulties in accessing the Old Bedford River, as well as working with them on other initiatives in the Anglian Region.”

Pat Fox wife of our company founder Charlie accompanied Chris Howes on the journey from Salters Lode to Welney on the Sunday.  When Pat and Charlie were running the business Pat says that  in the 1970’s their hire boats regularly used the Old Bedford river to access the Great Ouse at Denver many of these customers used the Ship Inn at Purls Bridge and the Three Tuns at Welney for moorings and refreshment.  On the campaign trip Pat met Peter Cox  a local historian from Tipps End. 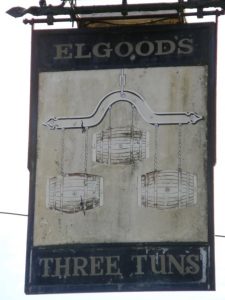 Peter visited the marina on Friday 31st August to place the Three Tuns boat register with Fox Narrowboats for safe keeping.  Peter takes up the history of the Three Tuns. 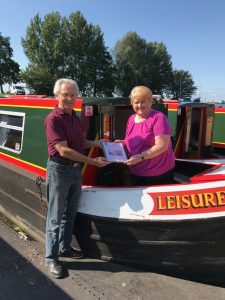 Peter Cox hands over the register to Pat Fox

This old exercise book, referred to as a Boat Register, was kept at the pub and used as a ‘visitors book’ for boaters (mostly on NBs) from May 1968 to Dec 1997 during the time that Mabs and John Waring ran and lived at the old-fashioned Fenland riverside pub. There are some large gaps in recorded visits – I don’t know if that’s an error by the pub, or indicative of navigation problems.

I doubt it was co-incidence that the Register was started shortly after John Waring arrived at the Three Tuns from the Middle East in 1967/68 to join his wife Mabs (Madge) who became licensee in 1966, nor that the first entry was by the then Chairman of the Inland Waterways Association (IWA), Lionel Munk, who arrived in NB ‘Sheerwater II’ on 14th May with other IWA members. 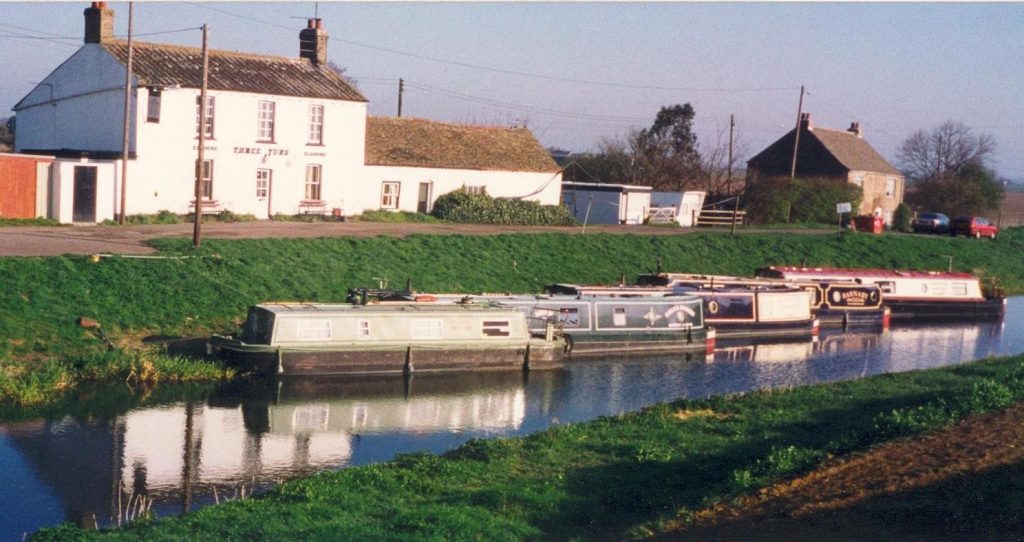 Mabs died in 1995 and John took on the licence, and when he died in 2001 the brewery closed the pub with the Register locked inside. Luckily it was salvaged in 2008 just prior to the pub’s demolition and handed to me “to look after” as I’m a local historian and webmaster of the Welney Website. As keeper not owner, I cannot gift the book to anyone, but am happy to offer it to Fox Narrowboats on a long-term loan basis to use as they wish, provided they return to me if requested or make it available to anyone with justified reason for claiming ownership or a better reason for being its keeper.

Fox Narrowboats are corporate members of The Inland Waterways Association (IWA). The IWA is the membership charity that works to protect and restore the country’s 6,500 miles of canals and rivers.  IWA is a national organisation with a network of volunteers and branches who deploy their expertise and knowledge to work constructively with navigation authorities, government and other organisations.  The Association also provides practical and technical support to restoration projects through its expert Waterway Recovery Group.

If you enjoyed this article you may wish to read

John Revell’s inspiration ahead of the Old Bedford campaign cruise