When Charlie and Pat Fox set up business in West End March in the 1960’s navigation on the Middle Level was very different from today. Stanground Lock was only 49′ long and Briggate bend at Whittlesey was so sharp that even boats shorter than 49′ struggled to get round. Well Creek through Upwell and Outwell was derelict and unnavigable.

In the mid 1970’s the Well Creek Trust were still restoring Well Creek . There were only two ways to take a boat from the Nene to the Ouse or vice versa, across the Wash from Sutton Bridge to Kings Lynn or take the route created by the Dutchman Cornelius Vermuyden in 1637 along the Old Bedford River. 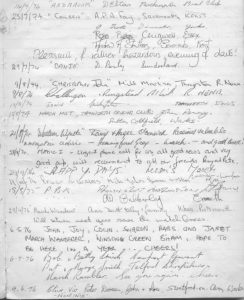 It is now possible for full length narrowboats to use the Nene to Ouse Link route. Well Creek was restored to navigation by an amazing band of volunteers, local contractors and the Middle Level Commissioners but sadly part of Vermuyden’s ancient route is now unnavigable. The entrance to Welches Dam lock was piled by the Environment Agency in 2006 and remains unusable a staggering 12 years later. The two mile stretch of Horseway Channel between Welches Dam lock and Horseway lock is also unnavigable, neglected and clogged up.

Modernising and lengthening a single lock and restoring a short stretch of river to full navigation is not rocket science. If, for example,  we have been able to re-open two derelict canals that cross the Pennines (the Rochdale and the Huddersfield Narrow canal) we must surely be able to re-open this route.

This old photo taken by Alan Faulkner in 1973 shows 16 boats waiting to lock out of the Old Bedford river and Pat Fox recalls over 40 boats using that same route that same year. 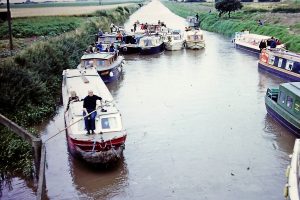 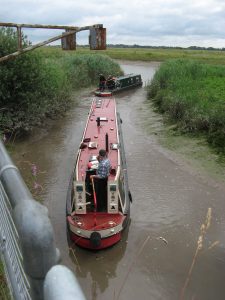 Between 19th & 22nd August 2018 Peterborough Branch  will be undertaking a campaign cruise from the tidal Ouse, along the Old Bedford River, to Welches Dam Lock, ahead of the IWA’s Festival of Water in St Neots, over the August bank holiday weekend. Full details can be found at  IWA Campaign Cruise.

Along with John Revell IWA Eastern Region Chair Chris Howes will be taking part with his 45 foot narrow boat. They are not only looking for other powered boats to join them – narrowboats and cruisers – but also small (self propelled) boats such as canoes, as well as walkers. It may prove difficult to get boats over 50 foot onto the (OBR) Old Bedford River, and larger boats are being encouraged to meet the flotilla at Horseway Lock, which is at the other end of the ‘blockage’.

Chris says “I was fortunate to make passage (along with two other boats) along the OBR in April 2017. Back in the mid 17th Century digging the OBR was the first stage of Cornelius Vermuden’s Herculean task of draining the Fens. Unlike other navigable Fenland drains, the OBR is not bordered on its west side by a high bank and the views across the Fen are truly rewarding. (Sunsets are particularly magnificent.)

During our 2017 trip I particularly remember the look of curiosity on the faces of a flock of black faced sheep, who had clearly never seen a boat before, and the wit of a couple of teenagers in Welney who observed “You wait all your life to see a barge, and then three come along at once!”

The neighbouring Ouse Washes are a nature reserve and a Site of Special Scientific Interest. We will be passing Welney Wildlife and Wetlands Centre. Twitchers don’t forget to bring your binoculars !