More thoughts from John Revell on the waterways. 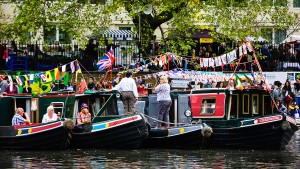 With under a week to go until the IWA Northampton Festival of Water Peterborough Branch member, our mooring customer and local waterways campaigner John Revell reminisces about the Kennet and Avon canal.  An inland waterways restoration success.

I spent some time in my youth visiting parts of the derelict Kennet and Avon canal. Re-opening the canal to boats seemed almost impossible then although I do remember helping clean out one of the locks on the Widcombe flight in Bath one bitterly cold day. But the impossible happened and I attended the formal reopening of the whole canal by the Queen many years later in 1990.

The next year, 1991, I took my boat along the newly restored canal from Reading to Bristol. Use of the Caen Hill locks at Devizes was very restricted because of problems with water supply but I was lucky to be allowed to descend part of the flight with another narrow boat after the annual general meeting of the Kennet and Avon Canal Trust.

As I locked down I noticed an elderly man and his wife looking very intently at my progress. I invited them on board and offered him the tiller. He steered the boat straight as a die into the locks so I thought he must have done some boating at some stage.

We talked a bit and after a while I discovered that this modest, unassuming man was John Gould, who I knew had done as much as anyone to keep alive the dream of a restored Kennet and Avon Canal. I asked him when he had last done the flight. The answer was 1947.

Kenneth Clew’s fascinating book “The Kennet and Avon Canal” notes that it took 4 weeks for John Gould to complete the journey in 1947 from Saltford to Wargrave and that for most of the way to Devizes two canal gangs of 12 or 14 men were used to bow haul the 2 boats. Things were worse above the flight where a canal gang of 12, a platoon of 11 soldiers, the crew and block and tackle double rigged were needed.

John Gould and another pioneer John Knill were the last commercial traders on the canal. He took court action in 1955 and 1956 to try and stop the canal being abandoned. He provided trips in a pleasure launch on the tiny isolated 3 ¾ mile stretch in Newbury and very much more. Without people like him the waterways network we can now use would be very much reduced.

[originally published in “Hereward”, the magazine of the Peterborough Branch of the Inland Waterways Association.]

Tweets by @FoxNarrowBoats
We collect some of your data automatically and use cookies. We will never share your data with another company for marketing purposesOkRead more