On our Spring 4-night narrowboat break aboard Rural Fox we headed out onto the river Great Ouse.  Our first day after a cruise of 3 ½ hours and having negotiated the Marmont Priory lock we moored for the night in Outwell and headed to the Crown Lodge Hotel for dinner.

The following morning after a breakfast cooked on board we arrived at the Salters Lode lock for the tide crossing to Denver.  We gained an insight into what to expect from Paul the lock keeper and very soon we had crossed the tidal waters and were on to the river Great Ouse.  We moored for the evening at the Environment Agency moorings in Littleport and headed off to find the memorial to William Harley, grandfather of the ‘hog’.  William Harley was born in Littleport in 1835.  In 1859 he immigrated to Oswego and went on to have children.  One of his children was William Sylvester Harley who went on to form the Harley-Davidson Motor Company with Arthur Davidson in 1903. 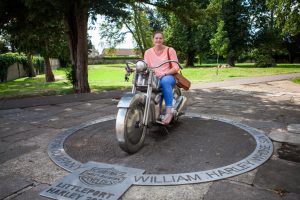 The following morning after an early start we arrived in Ely, from here we took a 20-minute train journey onto Cambridge.

In Cambridge we visited Scudamore’s to take a punt tour along the College backs.

I was intrigued to find out that the well-known Mathematical bridge is officially known as the wooden bridge and that back in 1963 students hung an Austin 7 car under the Bridge of Sighs having used 4 punts to get it there.

As a lover of cheese we then visited the Cambridge Cheese Company for some delicacies and before returning to the train we visited the Eagle pub for refreshment.  The pub has an RAF bar that has the inscriptions by World War II airmen covering the ceiling and walls.  In 1953 it was in this pub that Francis Crick interrupted the patron’s lunchtime on 28th February to announce that he and James Watson had ‘discovered the secret of life’ and they had come up with their proposal for the structure of DNA.  Here you can sample the special ale Eagles DNA.

After a fun day and short train journey we were back to Ely and the moorings where we stayed for the evening. 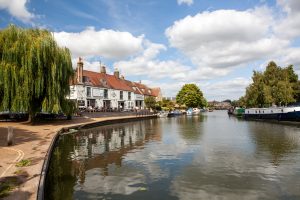 The following day was an early start and we headed down to Denver and crossed on the lunch time tide to wind our way back to March.  We crossed the Middle Level Main Drain at Muilicourt aqueduct before passing Outwell and Upwell, here we would have liked to stop at The Five Bells for a meal as I have previously eaten here and the food is plentiful however our holiday ended the following morning so we continued on to March for the night and moored in the town centre.

Total cruising hours for this journey 18, miles 58, locks 6.  Note there is a Tide Crossing to take into account when planning this journey.  Please consult Fox Narrowboats or the lock keepers at Salters Lode or Denver for crossing times when planning your trip.