Canal Lingo Those Toe Rags Won’t Tell You About

In days gone by, those who couldn’t afford shoes or socks would tie a rag around their toes and feet as a make-shift sock. This ‘look’ was worn by scoundrels, criminals and thieves – hence it’s offensive connotations – but I’ve also heard that boys wearing toe rags might hang around canal tunnels. They would offer to leg a working boat through for a cheaper rate than the official leggers might charge – hence they were cheeky little toe rags!

Legging or leggin’ it means to propel a boat through a tunnel (without a towpath) by lying on planks and ‘walking’ along the walls or the roof. Toe rag is now sometimes spelled as tow rag because the original background story has long since been forgotten.

When you begin boating on the cut (the canal) you start to learn all sorts of weird and wonderful slang words and boating terms. Some of my favourites are:

Crack the paddles: A paddle is a ‘trap-door’ that allows or prevents water to flow through a lock gate.  So the phrase just means to wind the paddles up on a lock gate.

Strapping in: This means stopping the boat on a post of some sort using a rope.

Cheesing the ropes: Cheesing is to tidy your ropes by winding them into a lovely spiral shape. 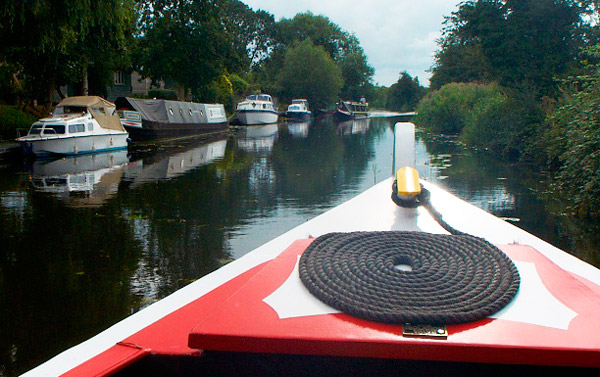 “Some things vary by area. In the Fens, paddles are known as slackers or penstocks and on the Severn a narrowboat is a longboat, and what we call a cabin shaft on the canals is a hookshaft on the Severn.  In the Fens we also call a dock or mooring a staithe, and a man-made drainage channel is a lode.

Amy is a huge fan of historic boats. She says, “Toe rag was used as a slang term to describe Severn canal boats and their steerers! No idea why! As the owner and steerer of my own Severner I find it interesting… if a bit offensive!”

Val Manning, author of the narrowboat novel The Other Side of Solitude says, “Not really canal-related, but a lane is called a drove. You also have a lot of Fenland place names relating to witchcraft, such as Wicken and Coveney.”

Other waterways words are used right across the network; such as butty, which is a cargo narrowboat that has no engine and is towed by one that does. A barge however is a canal or river cargo-carrying boat with a beam (12ft or more) that is about twice that of a narrow boat. The term is often incorrectly used to describe any boat carrying goods on a waterway.

The place where a canal narrows under a bridge is known as a bridge hole and a flight is a series of locks rising uphill with pounds in between them.  Inside each lock you will find a cill, which is a doorstep on which the lock gates sit.

A winding hole is a short length of very wide canal, used as a place to turn a boat around, and it is pronounced ‘whin-ding’; not ‘wine-ding’. It is so named because the wind can be used to help the boat to turn.

However, my favourite canal word is probably Gongoozler; meaning a bystander who enjoys watching the activities of boats and boater as they pass by.

For more ideas to add to this year’s holiday plans, sign up for digital updates from this blog. (We never share or sell email addresses – your details are safe with us.) Just look for ‘Follow Blog’ in the sidebar on the right and get insider knowledge about the Fenland Waterways.