The New Waterways That Narrowboaters Are Gonna Love

The impressive six-phase scheme will create about 50 miles of new navigations and will allow boats to use an additional 145 miles of waterways, linking the cathedral cities of Lincoln, Peterborough and Ely with the market towns of Boston, Spalding, Crowland and Ramsey. (Ely is currently the top destination for our hire boat customers.)

The project involves canals being cut, drains being made navigable and new locks being built. This venture, organised by the Environment Agency and funded by the Regional Development Agency, will create a new circular navigable route.

You may also have heard of the planned Bedford and Milton Keynes Waterway which will open up a route for broader beam boats between The Fens and the rest of Britain’s canal network.

Two schemes were originally proposed back in 1809 to link the waterways, although that intended route was slightly different. The two ideas were put before Parliament in 1811, but were unsuccessful. The proposal was raised again in 1815 and 1828, but the link was still not built.

However, Phase 1 was eventually completed in March 2009 and was celebrated with the official opening of Boston Lock, connecting the Haven at Boston with the South Forty-Foot Drain.

Phases 2 and 3 of the plan will link the South Forty-Foot Drain with the River Glen at Guthrams Gowt, and with the Glen above Surfleet Seas End Sluice along Vernatt’s Drain. Full details of all of the proposed works are available at www.fenswaterways.com.

The new navigations will offer plenty more opportunities for adventure for boaters beginning a holiday from our hire boat base in March. Until the work is complete, check out the existing routes that can be explored with Fox Narrowboats: River Ouse, Nene and Middle Level. 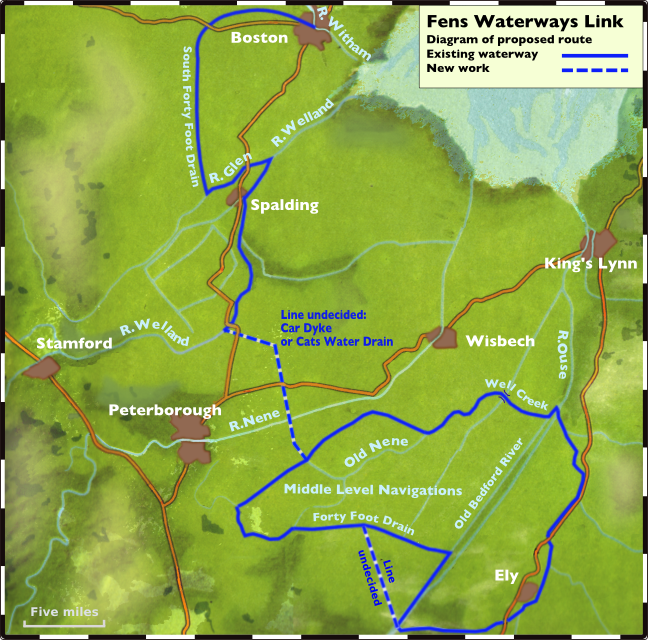 Image credit: Thanks to Old Moonraker for making this map available under a Creative Commons licence.