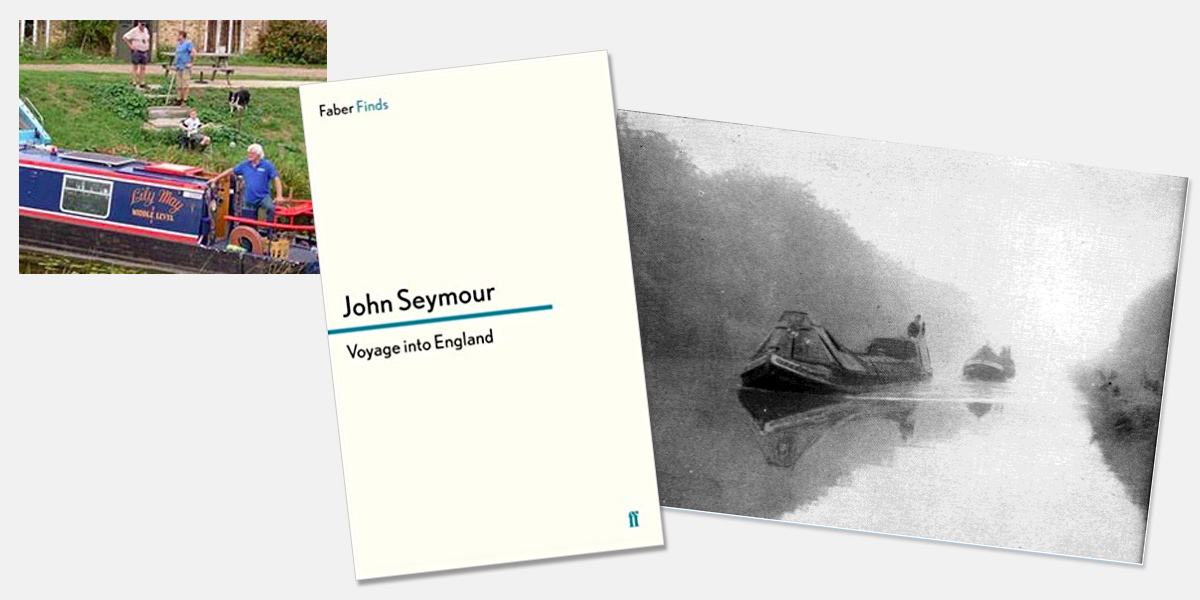 When Inland Waterways Association Region Chair Chris Howes sent me this book review. I immediately went to a well-known online book seller who offers prime delivery and placed an order.  As someone who had met Herb Everitt and Lou Doubleday as a child I have enjoyed reading John Seymour’s account of his travels around the network.

On a recent crisp winter morning I was browsing through a second hand book stall on Ely Market, when I found a fascinating account of a pioneering boat journey through the canals and rivers of England, undertaken in 1963. This entertaining and well written book paints a vivid picture of those early days of the boating renaissance when hardy adventurers strove to reclaim forgotten and ill used waters previously navigable.

The book chronicles a past, barely more than 50 years ago, that is almost forgotten. To give a ‘flavour’ we’ve reproduced short sections from chapters on the Nene, Middle Level, and crossing onto the Great Ouse. If I’ve whetted your appetite, copies are available on the interweb, or why not keep your eyes peeled when browsing second hand book stalls and charity shops ? described as ‘lock on the Nene – no need to draw paddles’ weed on the Middle Level Chapter 18 The Gracious River Nene.

At Peterborough, where we tied up alongside the town quay, many people came aboard us, two of them being Mr and Mrs Lou Doubleday, who live at Outwell in the Fens… Lou has a consuming passion for the Fen waterways.

His grandfather was a Fen lighterman, and captain of a steam-tug on the Fenland rivers. The Fen waters are in Lou’s blood. He wants to open up the Fenland rivers and drains again for traffic… They were terribly weeded up but, he said, its just a matter of determination. If necessary, we could bow-haul our boat. The locks were ancient and strange, and you had to know where to go to get the keys. Other people came aboard and there was a great discussion. the Fenland waterways must be opened again. the Great Ouse was booming, from Denver to St Neots, and a move was afoot to open the navigation as far as Bedford. (Ed’s note:- completed 1978). The Nene was getting full of boats. The network of water-ways in between, the Middle Level, was weeded up and silted, and there had been talk of closing it completely to navigation.

In Lou’s grandfather’s time, Fen lighters had traded to every corner of the Fen’s, carrying produce. Then the drainage people had lowered the water in the drains, and put ‘lighters on the bottom’. Low bridges had been built, and fixed sluices erected across the rivers. The commercial traffic was dead; no one then had ever dreamed that one day there would be a pleasure-boat traffic.

Lou Doubleday had just founded a new club: the Fen Watermen’s Association. I thought, what a nice name for it; how much better, and more apt, than ‘Yacht Club’. The headquarters were at March.

I asked, ‘What about a rally of boats at March? From all over the country?’ It would do Fenlanders good suddenly to see scores of boats sailing along dikes on which they had never seen boats before, nor realised that boats could get. They would suddenly realize that here was the possibility of turning an honest penny, as people who live along the Broads have done.

On that stirring note, the party broke up. We drank a toast to: ‘Speed Navigation!’, as the old canal speculators used to do, cast off, and sailed across the river to Stanground Creek.

Stanground Creek is a rum place; it would make a good lair for a tribe of river pirates. You drive under a railway bridge, into a wide creek just under half a mile long, with a couple of very cluttered-looking boat yards along it… It all smacks somehow of a junk- filled creek near Shanghai.

The passage of the Middle Level Stanground Lock proved easy but slow. There was no three-minutes-through-a-lock nonsense here. Half an hour discussion with the lock-keeper, searching for the ancient key that fitted the ancient paddle spindle, waiting a long time for the water to attain a level, then a pushing and shoving at the ancient gates, which one expected to fall to pieces at any moment.

This took us into Knut’s Dyke. This ditch was dug by King Canute, or at least by his order, so that His Majesty should not have to brave the crossing of Whittle Mere, a large and terrible body of water between Peterborough and Ramsey Abbey… We went from Knut’s Dyke to King’s Dyke, from King’s to Whittlesey Dyke (Whittlesey is where they make half the bricks in England, and the place is thick with tall ‘shafts’ or chimneys from the kilns. If this was a sensible country the bricks would be shipped down the Nene to London and other places. Instead they clutter up the roads). We hit the Old Course of the Nene, a winding river between high banks, and so we reached March.

Next day, we kept along the Old Nene, and turned right along Popham’s Eau until we struck the Sixteen Foot. We turned left along this and went as far as we could; to the aqueduct at Outwell. This aqueduct carries the Well Creek over the sixteen Foot, but you can’t get under it because there is a fixed sluice. The proper passage from the Nene to the Great Ouse is right along the Old Nene into Well Creek (over the aqueduct) to the Ouse. But this is now silted up. It is one of the main aims of the Fens Watermen’s Association to open this up again. Thanks to the Well Creek Trust since the book was written this waterway is now re opened to navigation.

We turned around and headed back; we had to go the full length of the Sixteen Foot. We ‘came fast’ under a bridge that some people had been repairing. it was Sunday, and they were away. They had built a low scaffolding, which was holding up shuttering for concrete. I had to strip the boat of various fittings to get through… I left a note pinned on the bridge telling the contractors, that they had no right to obstruct the navigation. (By law, there should be 8ft briggage along the Middle Levels; in fact you are lucky to find six.) We struck the Forty Foot drain; and then our troubles began, for we came into weed such as we had never encountered before. We revved and we went astern, we slashed and we hacked, we bow-hauled, and in the end we made it. To Welches Dam Lock, which must be one of the most ancient and antediluvian locks in England; the whole thing should be moved, lock, stock and barrel, into a museum. But Lou Doubleday was up to it; he walked half a mile to find the weird spanner which operates it, wound up the creaking paddles, and we got through. We turned sharp left at Welches Dam into the Old Bedford River (a dead straight canal many miles long).

…We plodded on, along that dead straight Old Bedford River, with a nip ashore at Welney (ed – Welney then had two pubs and the sluice hadn’t been installed). What a lost and forgotten world all that fen country is. Tiny homesteads standing about, miles from a hard road, like ships at sea on the dead flat fen. Every inch fertile, and every inch under the plough. Wonderful corn everywhere, ripe for the combine, hundred-acre fields of sugar beet, huge acreages of carrots. Some men pulling carrots told us that the trade was slow for them this year because it was a good fruit year. I asked them what the connection was. ‘What!’ they said. ‘Three-quarters of the carrot crop goes straight to the jam factories. If fruit’s cheap, they use more fruit and less carrots. If it’s dear, they take more carrots.’

We came to the End of the Old Bedford at Salter’s Lode, which is the gate that lets you through into the tidal waters of the Great Ouse. We had traversed the Middle Level. We were through the Fens.

Salter’s Lode is not a lock, but a single sluice-gate. (Ed – the Author is here referring to the sluice junction with the Old Bedford, not the lock between Well Creek and the tidal Great Ouse) You wait until the outside makes ‘a level’, the gate is wound open by the sluice-keeper, and out you go. A boat was coming in on the tide we took out. She laid tied up outside, we in. We respective crews leant on the railing looking at the ebbing muddy waters of the wide Great Ouse, saying: ‘It’ll be another half-hour yet!’ and shaking our heads.

Then the sluice-keeper, Mr Everitt, got to work. By heaving on a big windlass, he was able to pull the huge wooden door back against the tide; which was higher outside than in. As a general rule, the Fenland Waters are much higher than the land they drain; the water has to be pumped into them by diesel or electric pumps.

I went aboard and started the engine. The great door opened a chink, and water surged through. Gradually the door was wound back against a foot of water. The surge became a tide, and our boat strained at her ropes. Then Lou Doubleday-who was aboard the incoming boat and was to pilot her through the Middle Level as he had one us-shouted ‘Let her go!’ Her skipper did so, and she surged forward on the water, caught the gate a resounding thud, and shot past us like a scalded cat.

We let go, and started forward against the flood. Gradually we began to gain headway. Half the boat got through the gate. Then-wham!-the gate swung back and hit us amidships! The worn pall had slipped of the ratchet of the windlass on the bank and let the gate go, and the tidal pressure had slammed it on to us. Fortunately, we were of steel, and strong, and sustained no damage at all.

It was essential, though, to get free. The tide outside was sinking rapidly, and when it had sank below the level of the Old Bedford it would have been impossible to shut the sluice gate again. Mr Everitt and some passers-by sweated at the windlass on the bank, while we aboard shoved and levered at the gate. Slowly it yielded, and our good engine stemmed the tide. Inch by inch we slid out, into the little channel between the high mud banks which leads into the tidal Great Ouse… We slipped into the tideway, ran across the mouth of the New Bedford River (which is tidal) and reached Denver Sluice where we locked through into the non-tidal reaches of the Great Ouse.