Have you seen the latest addition to the flags flying here in the mooring basin? 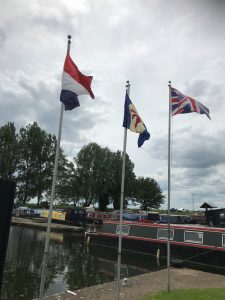 Our newest addition to the flags that we fly here is the Fenland Flag designed by James Bowman. On the flag design the yellow centre background recognises agriculture, the blue on either side represents the waterways and in the middle is a “Fenland Tiger”.

According to the website British County Flags  the term “Fen Tigers” was first used of the local inhabitants by Dutch engineers who arrived to assist with the drainage of the Fens, resulting in considerable land reclamation. The locals apparently exhibited some hostility to the incomers and were given the term “tigers” as a result. The concept was sufficiently recognised in the twentieth century for tigers to be included as supporters in the arms. 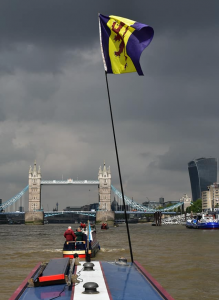 Sarah Cliss wrote in the Fenland Citizen earlier this year about James quest for the Fenland Flag.

James Bowen, 47, has been pushing for the region to have its own official flag and came up with a design which include’s a tiger on a yellow background with blue stripes running down the edges on either side.

Mr Bowman said: “The obvious symbol of the Fens is the Fen Tiger. This designation derives from the sometimes violent opposition of the local population to the drainage schemes of the 16th and 17th centuries.

“The term has subsequently been used for various clubs and associations. The proposed design features a heraldic tiger placed in a central field of yellow, representing agricultural prosperity. The blue outer fields represent the region’s natural and man-made waterways.”

For the flag to be officially registered in the UK, Mr Bowman needs to prove to the Flag Institute that there is a clear expression of support for it.

He needs to pull together evidence of people using it and present it to the organisation.

To do this, Mr Bowman has made car stickers and postcards of the design and gathered support from across the area including MP Lucy Frazer.

The MP for South East Cambridgeshire wrote a letter to the Flag Institute in support of the idea.

In a letter to Mr Bowman, the MP wrote: “Thanks you for writing to me about your design for a Fenland Flag.

“I was pleased to receive to receive the postcard you enclosed bearing your Fenland Flag design. “It is certainly a very smart and well-thought-out design and I wish you luck in your efforts of getting it officially accepted by the Flag Institute.

“As such, I have written to the Flag Institute to express my support for your proposal.”